Why didn’t I think of that? At some point in our lives, most of us have probably looked at a simple everyday item and asked that question.

From Post-it notes to the selfie stick, our lives are full of commonplace inventions that, in retrospect, seem painfully obvious. But it can be a long journey from even the most brilliant inspiration to a successful product.

Chef Jean-Paul Labadie embarked on that road nearly a year and a half ago. In January 2019, he left his chef de cuisine position at Emeril Lagasse’s MGM Grand Fish House to focus full time on developing and marketing a seemingly simple invention he hopes will become standard in working kitchens (and anywhere else aprons are worn).

“It’s a brand-new item,” Labadie says. “I created it. I patented it. And now we can mass-produce it.”

He’s referring to a deceptively simple strip of fabric he calls the ApronTie. Measuring 3 inches by 16 inches, it’s meant to do for chefs’ attire what suspenders do for a business suit: hold everything in place in a comfortable manner, while providing a touch of style.

Labadie demonstrates his invention at Studio 110 LV, photographer Glenn Adams’ Arts Factory space, where the pair make face masks and other personal protective equipment for first responders and the public.

Lined up on a table amid the high-tech sewing machines and printers are more than a dozen ApronTies. Some are bold, others restrained, presenting everything from corporate logos to whimsical abstracts in a rainbow of colors. Yet even as the chef demonstrates the simplicity of his one-size-fits-all creations, swiftly threading one through the top and bottom straps of his apron, their utility may not be immediately apparent to a layman.

“It keeps the apron over your jacket collar, so it doesn’t pull back,” he explains.

Labadie came up with the idea while running Lagasse’s MGM kitchen. The fine dining veteran says he never liked the way full-length aprons pulled and tugged while he worked.

“The top of the apron in the back gets over your jacket. So you’re always pulling your jacket forward. And if you’re wearing a T-shirt, it always rubs when you’re pulling up and down. It always bugged me. Then I saw these guys who would take the bottom string and tie it through the top loop and then pull it down. And I said, ‘I’ve got to come up with something (better), because I’m not walking around looking like that.’ ”

He insists he was thinking only about his own comfort and style when he sat down behind an old sewing machine and created the prototype. The results, however, were too good to keep to himself.

“I made a bunch, and I gave them to a lot of the cooks, and they loved it.”

It was a comment by a visiting food purveyor, however, that convinced him to consider building a business around them.

To finance his dream, Labadie sold his truck and cashed out his 401(k). After meeting Adams at a First Friday event, the two partnered to use the artist’s studio and sublimation printing technology to imprint custom designs on the product. It was one of their early collaborations that Labadie gave to chef John Church, a veteran of fine-dining restaurants such as Aureole, Eiffel Tower Restaurant, Alize and RM Seafood, who now operates his own local restaurant, Johnny C’s Diner.

“It was a Golden Knights (design), and I was like, ‘That’s freaking rad!’ because I love the Golden Knights,” Church recalls. “Then (I wore it) in the kitchens where I was consulting up in Reno, and people were like, ‘What are these?’ Where do I get those?’ ”

Inspired by the reaction among their chef friends, Labadie and Adams were preparing for a major rollout this spring when COVID-19 forced the cancellation of several events where ApronTies were to be featured. Understanding the severity of the crisis, they put the business on hold and began making face masks and gaiters for first responders and the public.

“We had all kinds of patterns already done for sale, and everything got shut down,” Labadie recalls. “(Glenn) was stuck in the studio, and I got stuck in the house. But he’s a super-resourceful individual. So he right away ordered the correct materials to start making masks.”

While that work continues, Labadie says they’re ready to get back into the ApronTie business. He’s currently selling his invention online at myaprontie.com, starting at $17.

“I think now that we’re going into the reopening and relaunching (of restaurants), it would be a good time for us to ease into relaunching (ApronTies).”

Chef Gary LaMorte, founder of the international restaurant management and consulting company Honest Hospitality, is an early adopter and supporter of the project.

“Other people have tried to create aprons that performed the same function,” he says. “But it was built into the apron, and the ties got too complicated. They were hard to take on and off. What the ApronTie does is it allows you to have all these different types of aprons, from different makers, but you can still have that same level of comfort. Because the ApronTie transcends whichever hipster apron you’re feeling the most excited about that month.”

LaMorte has placed an order for custom ApronTies, and Labadie hopes other chefs follow.

“More than a handful of people here locally asked me for samples, so I drove them out, dropped them off in their driveways, and got a couple of orders,” he says.

“So we’ve got a little niche here that hopefully we can get this thing off the ground.” 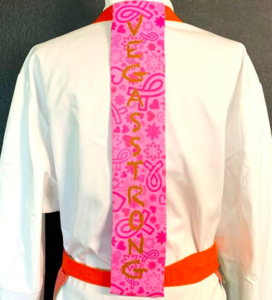 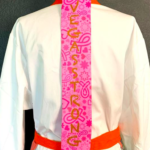 Easy On and Off